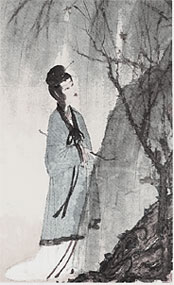 Throughout  a  woman’s  life,   there  are  key  times  when  dramatic  hormonal changes occur,  in particular at menarche, after pregnancy and childbirth,  and at menopause. These times often mark major life transitions and are accompanied by significant changes in both the  body  and  the mental/emotional  framework.  At the same  time,  they also offer a “window” through which profound change can be made and health influenced for years into the future.

When young  women  begin  their menses  at  menarche,  it  is  not  uncommon to have  unfamiliar difficulties  arise  as  hormones  change.    Migraines,  anxiety, PMS,  irregular cycles, and dysmenorrhea,  to name a few.    This is a time when using  Chinese  medicine  can  be  very effective,  and  promoting  balance  in  the body-mind system can set in place healthy patterns for the future.

In peri-menopause, while experiencing headaches or hot flashes,  it can be hard to find “the goddess within”.   There is a metaphor in Chinese medicine philosophy that is sometimes used to describe the shift that occurs as  women  approach  menopause.  It  has  to  do  with  the  meridian  or  channel called  the  Chong  mai,  which strongly influences the qi and blood and flows between the heart and the uterus / reproductive system.

During a  woman’s childbearing years,  the action of this channel primarily moves downward to promote the movement  of blood during menstruation,  the nourishment of the  baby during pregnancy,  and movement  of the baby through the birth canal during labor and delivery.  At menopause  with the cessation of the menses, the channel reverses its flow  and the qi and blood gather to nourish the heart,  the seat of wisdom,  in order to foster cultivation  of  the  inner self.   This is often  a  time  when  we  feel  called  to  re-evaluate  our priorities, where our true passion lies, and what really matters as we enter the second half of life.

Menopause  is not  a  disease  or  disorder,  but  a  time  when  the  body  is  transitioning out  of  the childbearing years.  But  because  peri-menopause  is  often  anticipated  as  a  difficult  time, women may  begin  taking hormone replacement therapy (HRT) without carefully considering the risks inherent in long term hormonal medications. Chinese medicine offers an approach that helps smooth the hormonal transition and assists the body-mind to regain balance and maintain vitality.

Acupuncture  and  Chinese  herbal  medicine  often  effectively  address the  many  of  the  problems commonly encountered in peri-menopause including:

Bone  density  loss  is  one  of  the   most  concerning  issues  facing  women  in  the  years  after reaching menopause,  and though osteoporosis prevention is the  best  approach,  many women show  early osteopenia.  Research  shows that  both  acupuncture  and  herbal  medicine  can  help increase  bone  mass in  both  amount and  density.  It  also  significantly  increases  blood circulation,  which  is  a  key  factor  in  the  health  and longevity of bones.